How is the European operational oceanography data exchange organised

Governmental agencies and research institutes are managing physical oceanography observation systems and take care of the first level of data processing for their own applications. An organisation collects, controls and distributes data in principle according to its own rules. However the development of Operational Oceanography at regional and global scales involves major investments which are difficult to be made by a single country. Active cooperation has thus always been a key issue for the development of the Global Ocean Observation System (GOOS).

EuroGOOS is coordinating the development and operation of (European) regional operational systems (ROOSs) which encompasses five systems at present for the Arctic (Arctic ROOS), the Baltic (BOOS), the North West Shelf (NOOS), the Ireland-Biscay-Iberian area (IBI-ROOS) and the Mediterranean (MONGOOS) sea regions. These regional assemblies are instrumental for active cooperation in new developments, operations and planning investments. This is done via specific and thematic working groups that collect and express the best expertise on specific fields. Recent EU marine data infrastructures and EU Programs are widely based on EuroGOOS and ROOSs achievements.

The Copernicus Marine Environment Monitoring Service (CMEMS) has been developed with support of the EU Copernicus programme and it uses information from both satellite and in situ observations to provide state-of-the-art analyses and daily forecasts for the marine environment. The In Situ Thematic Assembly Center (CMEMS-INSTAC) is a component of CMEMS and it provides a research and operational framework to gather and deliver in situ observations and derived products based on such observations.

For each EuroGOOS Region there is a Regional Data Assembly Centre (RDAC) working closely with organisations operating monitoring stations which are located in their region. Each RDAC is responsible for assembling operational data as provided by their operators, bundling these into an integrated dataset, and transferring these to the CMEMS-INSTAC service for validation and further distribution. Each RDAC tunes its activities with the CMEMS-INSTAC service. Routinely (e.g: every hour), each RDAC makes all its new data available on its regional portal. Files (i.e. NetCDF files) are organized in folders as described in the following image. 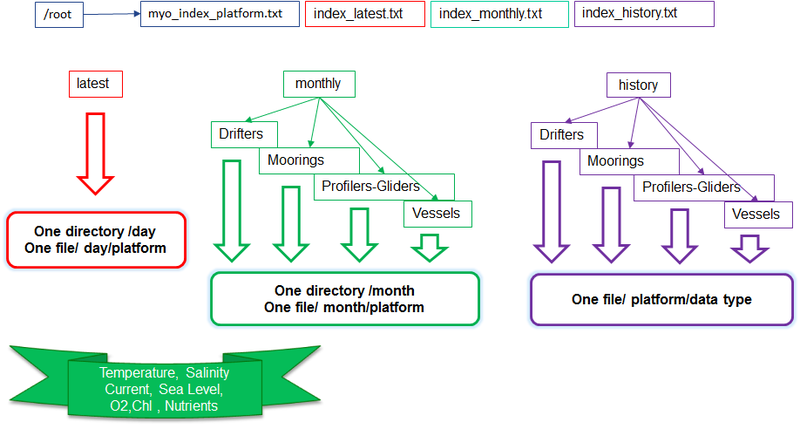 On an operational basis, the new data from all the RDACs are harvested by the CMEMS-INSTAC service. Quality control is performed automatically on the data that are made available in real-time and near real-time, while yearly scientific assessments are performed on the latest 30 years of data ( 60 years for T&S and Global scale). The CMEMS-INSTAC in addition to the data from European operators harvests and validates operational oceanography data from an increasing number of international networks and data hubs as a major mission is to provide the CMEMS forecasting components with a global coverage.

Note: A further validation and quality control as well as a more complete description with metadata take place when the observed data timeseries of European operators are passed to national data centres for long-term storage and stewardship. These data centres are mostly National Oceanographic Data Centres (NODCs) and partners in the SeaDataNet pan-European marine data management infrastructure which deals with data from a wide range of marine disciplines (geophysics, geology, chemistry, physics, and biology). SeaDataNet works closely together with EuroGOOS and CMEMS-INSTAC striving together for a complete coverage of available oceanography datasets. Together they are the 3 pillars under the EMODnet Physics portal.